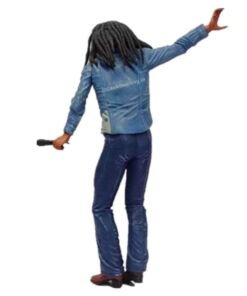 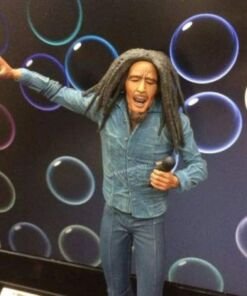 Robert Nesta Marley, OM was a Jamaican singer-songwriter who became an international musical and cultural icon, blending mostly reggae, ska, and rocksteady in his compositions.

Marley pursued a solo career upon his relocation to England which culminated in the release of the album Exodus in 1977, which established his worldwide reputation and elevated his status as one of the world’s best-selling artists of all time, with sales of more than 75 million records. The greatest hits album Legend was released in 1984, three years after Marley died.

He is credited with popularising reggae music around the world and served as a symbol of Jamaican culture and identity. He has become a global symbol and has inspired a significant merchandise industry.

The Jamaican musician, singer/songwriter, and Rastafarian has never looked better than in this incredibly detailed action figure. Standing approximately 7-inches tall, he’ll make no woman no cry, the figure shows Bob Marley as he appeared on stage in his legendary “Live at the Rainbow” performance.

Item Description:
Package Contents: 1 X Bob Marley Action figure mimicing “Live at the Rainbow” performance & 1 X Microphone accessory
If you have not watched the series, what are you waiting for? Watch it Here on Netflix or read the books – they are fun!